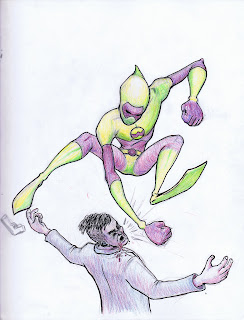 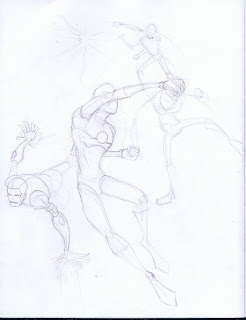 This is a character I had come up with a few months back. His names Wraith, a teleporting detective. I wanted to go for a film noir kind of guy, set in the '40's with powers, though Im sure the colours would suggest different. After writing a couple scripts that wont see the light of day, I came up with a 4 page story that a friend of mine, Gerard De La Costa, is illustrating for a year end project at school. Wraith looks way cooler now.

PS the guy he's hitting I believe is called Black Eyes...don't know anything about him yet, just some thug.

On the second picture I was just working on a couple poses for wraith, than started drawing Iron Man for some reason?
Posted by Anthony H at 1:58 PM