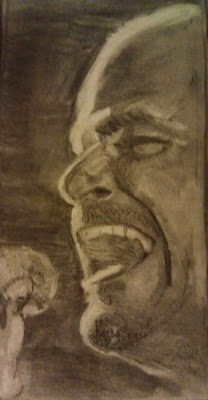 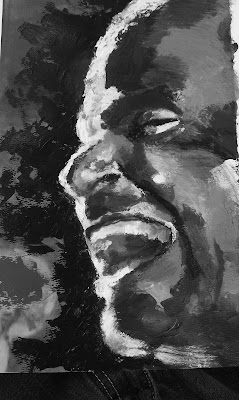 Last weekend I went to a CD release show of a Hamilton Hip Hop artist that I've been a big fan of since grade ten when I first saw him perform, with his then band, Warsawpack. Lee Reed, is a political and social hip hop emcee who's passion for Hamilton hip hop is unlike anyone else. The show had acts from handful of local emcees who all just did amazing work, some friends of mine and some I've never heard of before. The vibe that's flowing through the city right now with hip hop is unlike anything I've ever felt. All of this inspired me so much so, that I felt the need to show my appreciation to all these hardworking individuals and groups. I decided to do a series of portraits of all the local emcees, djs, and any other pivotal people who contribute to the life of hip hop in Hamilton.

The first of this series is Lee Reed, which only seemed fitting.With these picture here, the first was a reductive rough sketch, from there I've started painting which is the second photo. Now the picture was taken in black and white, the painting is actually done in a bunch of different colours, but I'll post what it really looks like at once its finished. But I'm already thanking everyone who is already showing interest in the series and is supporting it already. I'm proud to be from Hamilton, Ontario, Canada.
Posted by Anthony H at 7:00 PM