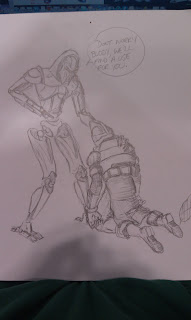 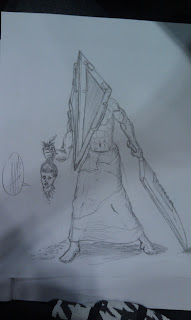 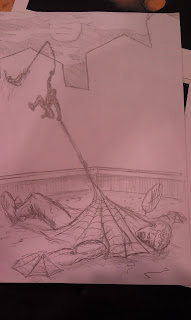 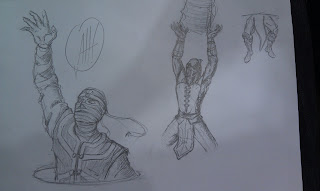 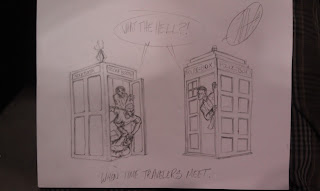 Here are some of the sketch commissions I did over the last two days. From top to bottom. After I had did the awesome Oraguntan sketch, things went the way I was expecting them. My buddy that I used to work with Dan came by with his brother Darren and asked me to do a Cylon sketch for him. That was on Saturday. The next sketch is of Pyramid Head, one of the first things I had done Sunday morning when I got there. I got to have fun explaining what I was drawing to a Police Officer, it was pretty funny. The Spider Man drawing was just something I was doing to pass the time on Saturday, and before the day was done on Sunday I had given it away to a little girl wearing a Spider Man shirt. She didn't say anything, but she had a big smile on her face so I guess she liked it. Finally I had gotten a Mortal Kombat commission on Sunday of Noob Sibot fighting Ermac, I had another one asked to do but because of the Con Cold I was focusing on trying to fight the whole day, I had forgotten to take a picture of. The other was of Noob Sibot again, but this time punching Shao Khan in the face, wish I had remembered to take a picture of that. Anyways, the last one here was another one I was doing to pass the time on Saturday, I thought about what might happen when to Time Travelers meet, I pictured it like when cartoons finds themselves in "nowhere" and its all white. So I did the obvious Time LORD, the Doctor, and had him meeting with a pair of duuuudes I grew up loving, Bill and Ted, and I couldn't have them in there without George RIP. While I was drawing this I had someone come by and say they liked it and would come by later to pick it up when its finished, well he never did, so on Sunday I ended up giving it away to a guy who looked just like the Doctor. He thanked me a lot.
Posted by Anthony H at 8:08 PM