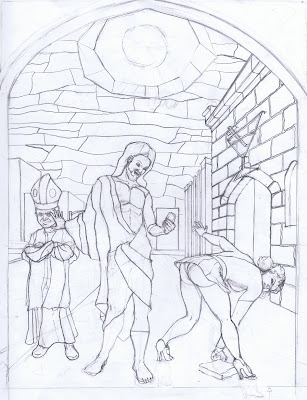 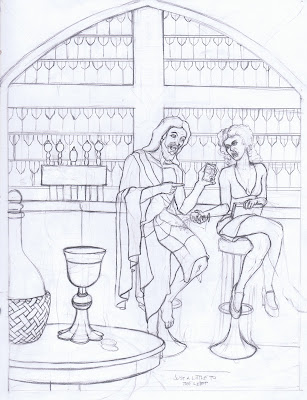 So this is a sequential assignment in one of my classes where we choose one of three excerpts from Craigs List, I chose the one titled, "You dropped your bible and I saw your thong." We were to recreate the scene described in the first illustration and the second is 10 to 25 years in the future.

I depict the guy who saw the thong as Jesus, who is just in awe of this woman behind he has to take a picture. Jesus finds himself inside the bar where he stood outside 10 years ago, and as coincidence he see the lady beside him, now at first he doesn't recognize her, but when she turned her back to him, he realized who it was. He pulls out his phone to confirm and uses this to break the ice. Well, it doesn't turn out to great, as shes not impressed...by Jesus.
Posted by Anthony H at 3:04 PM